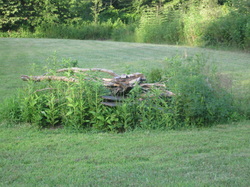 Dragon's Hearth is hosting a Faining on Saturday June 23 at 5:00 pm at the stead of Lonny Heft and his lovely lady, Katherine, to celebrate Midsumor (that's Midsummer to you modern English speakers).

We will be roasting beef brisket --- mmm, Rindfleisch! --- and having a potluck supper. Please bring a covered dish and some beverage to share. Ingela will have some of her Dragon's Breath Mead to share but we may run out so please bring some sort of refrescas or beverage to share as well. We will have plenty of napkins,  plates, bowls, cups, flatware, etc. and there are modern facilities available. Bring the kids, a chair, your camping gear, and your appetite - I don't feel like dining on leftover Rindfleisch all week. This event will be held rain, snow, shine,  hurricane, any and all acts of the gods. Come one, come all! This is a public event and everyone is welcome. There is also a pond on the property if you want to go swimming so bring your bathing suit or you can swim in your birthday suit.

This is one of the three Greatest Blessings of Dragon's Hearth, at which gifts are yielded to all of the gods and goddesses together. The celebration of these three blessings, the other two being Yule and Winterfyllith (Last Harvest).(1)

This is the longest day and the shortest night of the year: Now Sunna begins Her long decline, sliding into the darkness which will culminate six months from now at Yule. Identifying the sun with the brightness of Baldur, we celebrate in honor of both. Hold blot to Baldur and High Feast. This was the traditional time for holding the AlThing in ancient times.(2)

Midsummer refers to the period of time centered upon the summer solstice, but more often refers to specific European celebrations that accompany the actual solstice, or that take place on a day between June 21 and June 24, and the preceding evening. The exact dates vary between different cultures. Midsummer is especially important in the cultures of Scandinavia and Latvia where it is the most celebrated holiday apart from Christmas.

European midsummer-related holidays, traditions, and celebrations are pre-Christian in origin. They are particularly important in Northern Europe - Sweden, Norway, Denmark, Estonia, Finland, Latvia and Lithuania – but are also found in Germany, Ireland, parts of Britain (Cornwall especially), France, Italy, Malta, Portugal, Spain, Ukraine, other parts of Europe, and elsewhere - such as Canada, the United States, Puerto Rico, and also in the Southern Hemisphere (mostly in Brazil, Argentina and Australia), where this imported European celebration would be more appropriately called Midwinter.

Midsummer is also sometimes referred to by Neopagans and others as Litha, stemming from Bede's De temporum ratione which provides Anglo-Saxon names for the months roughly corresponding to June and July as "se Ærra Liþa" and "se Æfterra Liþa" (the "early Litha month" and the "later Litha month") with an intercalary month of "Liþa" appearing after se Æfterra Liþa on leap years. The fire festival or Lith- Summer solstice is a tradition for many pagans.

Solstice celebrations still center around the day of the astronomical summer solstice. Some choose to hold the rite on the 21st of June, even when this is not the longest day of the year, and some celebrate June 24, the day of the solstice in Roman times.

The celebration of Midsummer's Eve (St. John's Eve among Christians) was from ancient times a festival of the summer solstice. Some people believed that golden-flowered mid-summer plants, especially Calendula, and St. John's Wort, had miraculous healing powers and they therefore picked them on this night. Bonfires were lit to protect against evil spirits which were believed to roam freely when the sun was turning southwards again. In later years, witches were also thought to be on their way to meetings with other powerful beings.

In Sweden, Mid-summer celebration originates from the time before Christianity. In Sweden, Finland and Estonia, Midsummer's Eve is the greatest festival of the year, comparable only with Walpurgis Night, Christmas Eve, and New Year's Eve.

In modern Sweden, Midsummer's Eve and Midsummer's Day (Midsommarafton and Midsommardagen) were formerly celebrated on 23 June and 24 June, but since 1953 the celebration has been moved to the Friday and Saturday between 19 June and 26 June. It is one of the most important holidays of the year in Sweden, and probably the most uniquely Swedish in the way it is celebrated. The main celebrations take place on the Friday, and the traditional events include raising and dancing around a huge maypole. Before the maypole is raised, greens and flowers are collected and used to cover the entire pole.

Raising and dancing around a maypole (majstång or midsommarstång) is an activity that attracts families and many others. People dancing around the pole listen to traditional music and some even wear traditional folk costumes. In addition, many wear crowns made of wild sprigs and wildflowers on their heads. The year's first potatoes, Soused herring, Chives, Sour Cream, Beer, Schnapps and the first strawberries of the season are on the menu. Drinking songs (Snapsvisor) are also important at this feast, and many drink heavily. When Sweden got its National day (6 June), discussions were held about making Midsummer the Swedish national day because of the strong civil celebration on this day.

Because Midsummer was thought to be one of the times of the year when magic was strongest, it was considered a good night to perform rituals to look into the future. Traditionally, young people pick bouquets of seven or nine different flowers and put them under their pillow in the hope of dreaming about their future spouse. In the past it was believed that herbs picked at Midsummer were highly potent, and water from springs could bring good health. Greenery placed over houses and barns were supposed to bring good fortune and health to people and livestock; this old tradition of decorating with greens continues, even though most don't take it seriously. To decorate with greens was called att maja (to may) and may be the origin of the word majstång, maja coming originally from the month May. Other researchers say the term came from German merchants who raised the maypole in June because the Swedish climate made it impossible to find the necessary greens and flowers in May, and continued to call it a maypole. Today, however, it is most commonly called a "midsommarstång" (literally midsummer's pole).

In earlier times, small spires wrapped in greens were erected; this probably predates the maypole tradition, which is believed by many to have come from the continent in the Middle Ages. Others argue that some form of Midsummer pole occurred in Sweden during the pre-Christian times, and was a phallic fertility symbol, meant to impregnate the earth, but as there were no records from those times it cannot be proven, and this idea might just be a modern interpretation of the pole's form. The earliest historical mention of the maypole in Sweden is from the Middle Ages. Midsummer was, however, linked to an ancient fertility festival which was adapted into St. John's Day by the church, even though it retained many pagan traditions, as the Swedes were slow to give up the old heathen customs. The connection to fertility is naturally linked to the time of year. Many young people became passionate at Midsummer, and this was accepted, probably because it resulted in more childbirths in March which was a good time for children to be born.

In Denmark and Norway midsummer is referred to as the eve of Skt. Hans but it's only in Sweden that it has kept its original name.

In Sweden and parts of Finland, the tradition of bonfires is not part of Midsummer but rather of the "Valborg's" evening festivities, when winter leaves are burned for summer.

An old Swedish tradition is that unmarried girls should before bedtime midsummer´s eve pick seven kinds of flowers and jump over seven roundpole fences and then sleep with the flowers under the pillow. During the night they will dream about the boys they will get married to.

The day of sun solstice is called Sommersonnenwende in German. Bonfires are still a custom in many areas of Germany. People gather to watch the bonfire and celebrate solstice. (3)